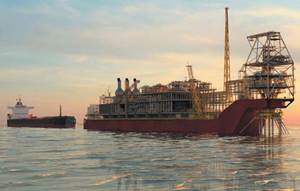 Australia's Woodside Petroleum posted a nearly 7% rise in fourth-quarter production on Thursday and forecast higher output for fiscal 2020, as it steps up work on growth projects in a bid to triple its oil and gas reserves over a decade.

The country's largest listed oil and gas explorer said it expects production between 97 million barrels of oil equivalent (mmboe) and 103 mmboe in 2020, above the 89.6 mmboe it churned out in 2019. It had forecast output of about 100 mmboe for 2020.

Woodside had said in November that it expects projects worth over $36 billion in Australia, Senegal, and Myanmar to boost its oil and gas reserve base and expand production by 6% each year over the next decade.

The company had recently received the green light for its Sangomar oil project in Senegal and had reached a tolling agreement to process gas from the $11 billion Scarborough project with partner BHP Group.

The larger $20.5 billion Browse project, however, has been bogged down by lengthy negotiations between partners on the terms for processing gas.

The average realized price for its products fell to $48 per barrel of oil equivalent (boe) in the quarter from $59 per boe in the same period last year. (Reporting by Shriya Ramakrishnan in Bengaluru; Editing by Amy Caren Daniel)