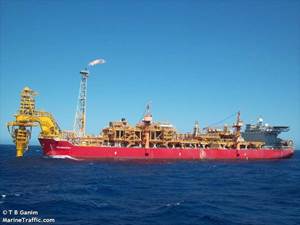 Australian offshore oil and gas regulator NOPSEMA on Friday said it was taking compliance action against oil firm Woodside Energy Ltd to ensure safe and responsible decommissioning of the Nganhurra riser turret mooring. The regulator said it was looking at possible breaches of law, as well.

Nganhurra is the name of the FPSO which used to produce oil from the Enfield field, off W. Australia between 2006 and late 2018, when it was moved off location.

Woodside had planned to remove the associated riser turret mooring and tow it Henderson, Western Australia (WA) for removal and onshore disposal. However, the company then said it couldn't proceed with this method due to failure identified within internal compartment 2, near the base
of the RTM, which meant it was not possible to deballast the compartment. The inability to deballast the compartment prevented the RTM from being rotated to horizontal.

NOPSEMA said Friday it had accepted a revised Nganhurra cessation of operations Environment Plan by Woodside, for the decommissioning of the Nganhurra riser turret mooring from title area WA-28-L.

Through accepting the environment plan, NOPSEMA has required Woodside to implement a range of protective measures to prevent and mitigate impacts to whale sharks, turtles, and seabirds, the regulator said.

In addition, the regulator said Friday, NOPSEMA has initiated regulatory compliance action due to Woodside being unable to comply with an originally approved plan to remove the equipment for onshore disposal.

"Due to the equipment’s poor condition and repair, this is no longer feasible without unacceptable risks to safety and the environment," Nopsema said.

"Woodside has been issued with enforcement action in the form of a General Direction requiring wells to be plugged or closed off, and property no longer in use to be removed in a timely and proper manner. The General Direction reinforces legal requirements regarding the removal of property associated with offshore petroleum activities and carries significant civil and criminal penalties for non-compliance," NOPSEMA said.

Further, NOPSEMA said, as Woodside is unable to decommission the riser turret mooring as originally approved, NOPSEMA is investigating possible breaches of the Offshore Petroleum and Greenhouse Gas Storage Act 2006. The investigation will examine possible breaches of the law relating to requirements to maintain property in good condition and repair.

"Decommissioning of the riser turret mooring can now be [carried out] through removal from the title area for placement on the seabed as part of an integrated artificial reef. Decommissioning in this way requires a permit under sea dumping legislation administered by the Department of Agriculture, Water and the Environment. This regulatory process is in addition to NOPSEMA’s assessment of Woodside’s environment plan," NOPSEMA said.