Woodside Boosts Spending for Next Leg of Growth 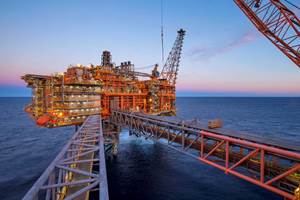 Australia's Woodside Petroleum Ltd on Thursday flagged higher-than-expected investment spending for 2019 as it steps up early work on the two big natural gas developments that will drive its growth in the next decade.

Australia's largest independent gas and oil producer plans to spend between $1.6 billion and $1.7 billion in 2019 on projects, significantly higher than an estimate from UBS of $1.2 billion.

At the same time it is roughly halving exploration spending from $273 million last year.

"The cut in exploration spend is really us looking forward now that we've got growing confidence in the projects -- in Browse, Scarborough, Pluto, also in Senegal," Chief Financial Officer Sherry Duhe told Reuters in an interview.

Perth-based Woodside aims to lead the next leg of liquefied natural gas (LNG) investments in Australia with its Scarborough and Browse projects and an expansion of Pluto, aiming to make final investment decisions in 2020.

Woodside is currently holding talks with its partner BHP Group over the tolling fee that will be charged for gas from Scarborough, an offshore field, to be processed at a new facility at the existing Pluto LNG plant, before BHP signs off on early work for the project, Duhe said.

BHP has an option to increase its 25 percent stake in Scarborough when it signs off on the initial engineering and design work.

Browse is the biggest undeveloped offshore gas field off Western Australia, and will also send gas for processing into LNG onshore. Woodside expects to reach a final agreement "certainly in the first half of this year" to be the anchor supplier into the existing North West Shelf LNG plant, Duhe said.

Spot LNG prices have fallen for January and February because of a surplus of LNG cargoes due to a relatively warm winter in North Asia, RBC analyst Ben Wilson said in a note.

As a result, Woodside might book lower prices in the first quarter, but Duhe said a volatile oil market made it hard to predict what will happen.

Woodside's total production in the fourth quarter rose to 24.1 million barrels of oil equivalent (boe) from 21.9 million boe a year earlier. That led to an 8.3 percent rise in annual output to 91.4 million boe, topping Woodside's own forecast.

It expects annual output in 2019 of between 88 million boe and 94 million boe.