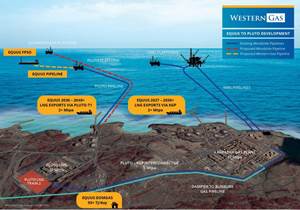 Australian oil and gas company Western Gas has signed non-binding milestone agreements with the North West Shelf Project participants and Pluto LNG in Australia to process up to 3 Mtpa of gas from its Equus offshore gas field for LNG export and the WA market from 2027.

The company has signed and agreement with the North West Shelf (NWS) Project participants to produce and export 2-3 Mtpa of LNG via the Karratha Gas Plant (KGP) from 2027.

"These non-binding agreements are significant steps in the commercialisation of the Equus Gas Project, allowing Western Gas to market 2-3 Mtpa of LNG to international buyers from 2027 at a time of global energy market disruption and increasing LNG demand," Western Gas said.

Equus gas will be supplied via a Floating Production Storage and Offloading facility (FPSO) and new offshore pipeline connecting the Equus fields to the existing offshore Pluto A Platform in Commonwealth waters.

Equus gas will then be transported onshore via the existing Pluto trunkline to the Pluto LNG facility and via Woodside’s Pluto to KGP Interconnector to KGP.

The development concept contemplates processing of Equus gas at these facilities as follows:  300 to 500 mmscf/d in the NWS KGP to be processed for LNG export and 50 to 75 TJ/d domestic gas from mid 2027 to the end of 2030 with the opportunity to extend beyond 2030 to be considered; and  250 to 300 mmscf/d in Pluto Train 1 for LNG export as capacity becomes available and up to 50 TJ/d domestic gas.

The company said that the Equus gas supply will enable it Western Gas to deliver 2 to 3 Mtpa of LNG for 10 to 20 years from 2027 for export "at a time when countries are seeking new long-term and reliable LNG contracts to support the energy transition," and more than 50 TJ/d for the Western Australian market from 2027 using the existing Dampier to Bunbury Natural Gas Pipeline (DBNGP) – the equivalent of 75 per cent of the gas consumed by residential and small business customers in WA each day.

"Western Gas, NWS Project participants and Pluto LNG intend to undertake joint technical studies on the integration and optimisation of Equus into the existing infrastructure and finalise the binding commercial arrangements for Equus transportation and processing. As part of the technical studies, the parties will seek to identify greenhouse gas and emission reduction opportunities in relation to both the upstream and downstream activities," the company said.

The parties are aiming to complete the joint technical studies and enter binding Agreements during 2023 to enable Front End Engineering and Design.