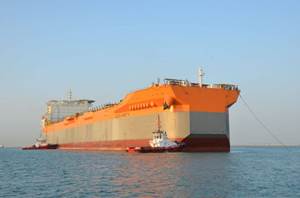 SBM Offshore, the Netherlands-based FPSO supplier, has shared a video of its Liza Unity FPSO Hull going into the dry dock in Singapore.

The hull was ordered on speculation in 2017 as the first of what are now five hulls being built as part of SBM Offshore's Fast4Ward standardized-FPSO-hull program. ExxonMobil then came out as the suitor for the unit, and the FPSO will be deployed at its Liza field in Guyana.

The Liza Unity hull was built by Shanghai's SWS shipyard and has recently arrived in Singapore for topside integration.

Shortly after arriving in Singapore in February 2020, the Liza Unity hull was moved into dry-dock.

During this phase, the mooring structures are integrated and the first topsides modules are lifted onto the vessel.

Upon completion of the dry-dock phase, the hull will be transferred back to the integration quayside to complete the topsides lifting and integration campaign.

Worth noting, due to COVID-19, the yards in Singapore are currently closed, however, Hess, Exxon's partner in the Liza project offshore Guyana recently reassured that Liza Phase 2, which will use the Liza Unity, remained on target to achieve first oil in 2022. The Liza Unity will have a 220,000 bopd per day capacity.

SBM Offshore previously delivered the Liza Destiny FPSO for Exxon's first phase of the Liza development in Guyana. This FPSO was converted from a VLCC and has a production capacity of120,000 barrels of oil per day.

It began production of oil in December 2019, making Guyana an oil-producing nation.