Tullow to Axe a Third of Its Workforce 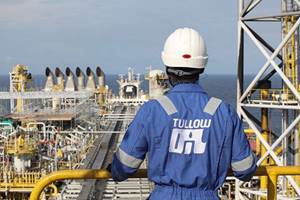 Tullow Oil plans to cut a third of its staff to slash its administration costs by a fifth, or around $20 million, a source with direct knowledge of the matter said, after weak output in Ghana, delays in East Africa and lower-than-hoped-for oil quality in Guyana.

The move would shrink Tullow, which industry sources told Reuters is looking to sell its Kenya projects once vaunted as a growth engine for the group, to a workforce of around 650 people and come alongside pay and hiring freezes, the source said.

This would allow Tullow to cut its annual net administration costs by around a fifth to $80 million which, across Tullow's projects including costs to its partners, equates to $100 million less administration spending, the source said.

A spokesman for Tullow confirmed a consultation process, which precedes any job cuts, had begun.

"Tullow estimates that the measures will deliver considerable savings and the group's workforce may reduce by approximately a third globally with potential office closures in Dublin and Cape Town among a number of measures to reduce costs and overheads," the spokesman said.

Its Cape Town and Dublin offices are focused on exploration, an area where Tullow is halving its spending to around $75 million. It is also cancelling its $100 million dividend plans.

Across the group, senior management jobs also face cuts of around a third, the source added.

After a string of production downgrades, Tullow expects its production to shrink to 75,000 barrels per day this year and to 70,000 bpd from 2021.

Tullow has yet to announce a new chief executive after CEO Paul McDade resigned in December.

Tullow's share price plummeted 64% last year. Its market capitalisation stood at around $900 million as of Tuesday while its debt pile was around $2.8 billion at the end of 2019.

It targets free cash flow of $150 million this year at an oil price of $60 a barrel.

Tullow has pushed back its full-year results to March 12, when further details of its restructuring are expected. Executive Chair Dorothy Thompson has said the announcement of a new CEO might come after that date.