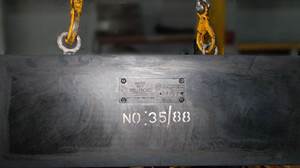 Trelleborg announced on Wednesday that its offshore operation has been awarded a fast track contract to produce more than 80 laminated elastomeric bearings for floating production storage and offloading (FPSO) vessel operator MODEC.

The first delivery was in July 2019 and the bearings will be installed on a FPSO for use in the Eni-operated Area 1 block offshore Mexico.

Elastomeric bearings are produced with steel plates encased within rubber and installed between the hull of a vessel and the vessel’s modules. They are used to accommodate axial, shear and rotational movement. By doing so, they keep a vessel's modules safe from the impact, damage and deformation that can arise from adverse sea and weather conditions.

MODEC will own the Area 1 FPSO and provide the operations and maintenance services to Eni Mexico S. de R.L. de C.V. for an initial 15-year period with the option of one-year extensions for a further five years. The FPSO will be capable of processing 90,000 barrels of crude oil per day, 75 million cubic feet of gas per day, 120,000 barrels of water injection per day and have a storage capacity of 700,000 barrels of crude oil. The first oil production by the FPSO is planned for 2021.