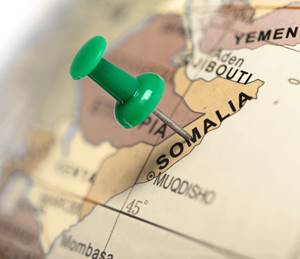 Royal Dutch Shell and Exxon Mobil are looking to return to Somalia ahead of an oil block bid round later this year, the East African country's oil ministry said.

Shell and Exxon Mobil had a joint venture on five offshore blocks in Somalia prior to the toppling of dictator Mohamed Siad Barre in the early 1990s.

The country has been mired in insecurity since Barre left and is battling Islamist group al Shabaab that frequently carries out bombings in the capital Mogadishu and elsewhere in the country.

The exploration and development of the five offshore blocks was suspended in 1990 under what is known as a "force majeure", but Shell and Exxon have accrued rentals to the government since then, Shell said in a statement.

The country currently does not produce any oil but production could transform the economy as early stage seismic data has shown there could be significant oil reserves offshore.

"(An) agreement was signed in Amsterdam on June 21st 2019 and settles issues relating to surface rentals and other incurred obligations on offshore blocks," the ministry said.

The force majeure remains in place, regardless of the recent development, Shell added.

The parties have also agreed to hold talks to convert their old contracts in line with the a new petroleum bill that was passed earlier this year.

Somalia hopes to allocate 15 offshore blocks with a potential bid date schedule for November. A roadshow is being organised in Houston, Texas in late September or early October.

Somalia has also passed a revenue sharing agreement, splitting revenue with oil producing states but has not yet decided on the share the government will keep in the blocks it awards.