SBM Offshore to Build Fourth FPSO for Exxon in Guyana 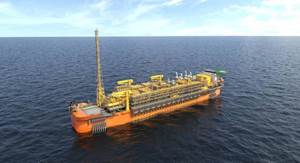 The FEED contract for what will be Guyana's fourth FPSO, and fourth delivered by SBM Offshore, triggers the initial release of funds by ExxonMobil to begin FEED activities and secure a Fast4Ward hull.

The Fast4Ward program includes a new build, multi-Purpose Floater hull combined with several standardized topsides modules. SBM Offshore orders these hulls in China without contracts secured, so that when it does secure a contract, the FPSO delivery time is shorter.

Following FEED and subject to government approvals in Guyana of the development plan, project sanction including final investment decision by ExxonMobil, and ExxonMobil's release of the second phase of work, SBM Offshore will construct, install and then lease the FPSO and operate it for a period of up to 2 years. First oil is expected in 2025.

"Building on the experience to date on the Liza Destiny, Liza Unity, and Prosperity FPSOs, SBM Offshore continues to commit to local content development in Guyana through sourcing fabrication scope locally and the integration of Guyanese engineers in the execution and operational teams," SBM Offshore said.

SBM Offshore also said that, to strengthen its execution model given the current challenging market environment, it has established a special purpose company (SPC) with McDermott for the execution of the turnkey phase of the project.

"This SPC will benefit from the combined engineering and fabrication capacity as well as the experience of both companies in delivering EPC solutions to the energy industry. SBM Offshore will hold 70% and McDermott will hold 30% equity ownership in this SPC. The FPSO will be fully owned by SBM Offshore," SBM Offshore said.

Bruno Chabas, SBM Offshore’s Chief Executive Officer: "SBM Offshore is proud to announce ExxonMobil has awarded the contracts for the fourth FPSO to be deployed in Guyana. When finished, the FPSO will be the largest producing unit ever built by the Company. This project again demonstrates the value that our industry-leading Fast4Ward® program continues to bring to our clients and other stakeholders. We are also pleased to announce our partnership with McDermott and look forward to working together through the execution phase and deliver this world-class project.”

Samik Mukherjee, McDermott’s Executive Vice President and Chief Operating Officer: "Our people and resources bring the proven project execution, integrated engineering and modularization capabilities essential for delivery assurance and success. We will align these strengths with those of SBM Offshore to drive a cohesive, efficient execution strategy together.”

In the past few years, Exxon has discovered around 10 billion barrels of oil in the Stabroek Block and expects to bring at least six projects online by 2027. It sees potential for up to 10 projects to develop its current recoverable resource base in the country.

Worth noting, with the FPSO order for Yellowtail - subject to the project reaching FID - SBM Offshore has secured contracts for all six Fast4Ward hull ordered on speculation so far. Three of these will be deployed in Guyana. The first FPSO built under the Fast4Ward program - Liza Unity FPSO - reached Guyana in October. First oil is expected in early 2022.

According to a recent report by IMA/WER, around 30 production floater contracts are now queued up for award over the next 18 months, assuming no major market disruption occurs and the supply chain can absorb the orders within this time frame. Read more.