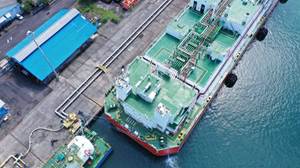 Poland could build a second floating storage and regasification unit (FSRU) next to an already planned installation because the Czech Republic and Slovakia are interested in buying more liquefied natural gas (LNG), the Polish climate minister said.

Czech Republic and Slovakia are seeking alternatives to cut reliance on Russian supplies. Slovakia's state gas firm SPP struck deals to buy enough piped Norwegian gas and LNG to cover about 65% of its demand until the end of next year. Read full story

Poland plans to open an FSRU unit on the Baltic Sea near Gdansk in 2026. It will have a regasification capacity of 6 billion cubic meters (bcm) of gas a year. The nation already has an LNG terminal, with a capacity 6.2 bcm.

"Different options can be considered. We could open another FSRU and charter another vessel but this would be a responsibility of our partners," Climate Minister Anna Moskwa told Biznesalert website.

Moskwa said Poland wanted the FSRU to be part of "Repower EU", the European Union plan to end use of Russian energy. She added it could have a regasification capacity of either 6 or 12 bcm, depending on demand from neighbors.

She said that Poland did not need a windfall tax to channel some profits made by companies from soaring energy prices to consumers, because the Polish energy industry was dominated by state-controlled entities that were required to ensure energy security.