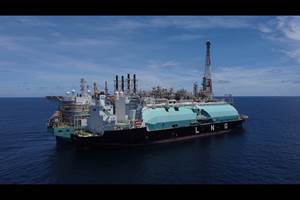 "The milestone cargo was successfully loaded on September 25, 2021, onto the Seri Cemara LNG carrier operated by MISC Berhad for shipment to Taiwan," Petronas said.

"The 50th cargo is a significant achievement for PETRONAS, a pioneer in the industry, and demonstrates the viability of offshore gas production with FLNG solutions," Petronas said.

The first FLNG cargo was produced from the Kanowit gas field, offshore Sarawak in 2017.

Petronas reminded that the PFLNG Satu was also the world’s first FLNG facility to successfully produce LNG from two remote gas fields when it was relocated from the Kanowit gas field to its current location at the Kebabangan gas field, offshore Sabah, in 2019.

The company's Vice President of LNG Assets, Abang Yusuf Abang Puteh said that since the start-up, the PFLNG Satu has produced and exported nearly 3.18 million tonnes of LNG from the Kebabangan and Kanowit gas fields.

The PFLNG Satu is designed to operate at water depths of up to 200 meters with a production capacity of 1.2 million tonnes of LNG per year.