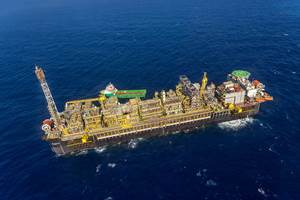 Petrobras, as the state-run firm is known, aims to produce 2.2 million barrels of oil per day (bopd) next year, below a prior forecast of more than 2.3 million bopd provided last December.

Preferred shares of Petrobras slid around 1% in early trading on the Sao Paulo stock exchange.

Petrobras raised its oil production target for the end of the five-year period to 2.9 million bopd, reflecting an aggressive ramp-up for major offshore prospects, as the company sells downstream assets to focus on exploration and production.

The company's latest divestment plan forecasts sales of $20-30 billion over the next five years, concentrated in the next two years, roughly in line with a target of $26.9 billion in the previous five-year plan.

Petrobras plans to invest $75.7 billion between 2020 and 2024, with 85% of the total being allocated to exploration and production. Capital spending for the period fell from $84.1 billion in the 2019-2023, underscoring a sunset for the company's most aggressive period of offshore investments.

The company's target for net debt to equal about 1.5 times earnings before interest, taxes, depreciation and amortization (EBITDA) remained unchanged.