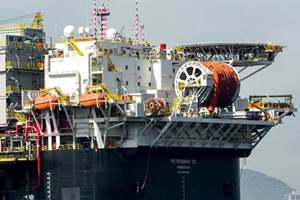 Brazil's state-run oil firm Petroleo Brasileiro SA said on Thursday that it has commenced oil and gas production at the Atapu well in the eastern portion of the country's massive Santos basin.

Petrobras, as the company is known, is operating the well with the P-70 floating production, storage and offloading unit (FPSO), which has daily production capacity of 150,000 barrels of oil and 6 million cubic meters of natural gas.

The FPSO is operating approximately 200 kilometers off the coast of Rio de Janeiro, in 2,300 meters water depth, and may eventually be connected with up to eight producing wells and eight injector wells. 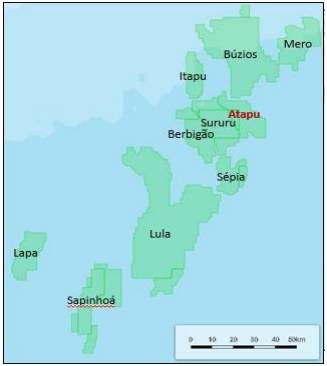 Atapu is located in the eastern portion of the pre-salt Santos Basin, near the Búzios field. (Image: Petrobras)

Earlier this year, the P-70 was nearly beached in Niteroi when a storm caused two anchor lines to break while the newly delivered FPSO was being moored in Guanabara Bay.

Previously, while the FPSO was being transported from China to Brazil aboard the Boka Vanguard semi-submersible heavy lift ship, one contractor died and five others became seriously ill after consuming a cleaning liquid found on board of the FPSO.