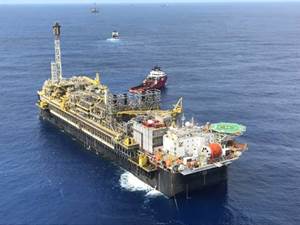 The new executive board of Brazil's Petrobras signaled on Thursday that it would largely follow plans set out by the previous administration, statements likely to ease investor concerns about the firm's tumultuous start to 2021.

Joaquim Silva e Luna, a former army general who was made chief executive in April, said in written comments provided alongside the state-run oil company's first-quarter results that the producer would focus on areas "where we are recognized as world leaders."

"We're going to continue our total focus on the strategies established in our strategic plan, generating value in all of our operations and projects and managing our portfolio with the objective of maximizing returns for our shareholders and other stakeholders," Araujo said.

Right-wing President Jair Bolsonaro announced in February that he would push out then-CEO Roberto Castello Branco following a spat over domestic fuel prices, sending shares in the company tumbling amid fears of increasing government interference. Castello Branco formally left the company in April.

In limited public statements, Luna has made some overtures to the market, implying that the company would move forward with its multi-billion-dollar divestment program, which is hugely popular with investors. But the Thursday statements were some of the most explicit yet.

Petroleo Brasileiro reported a first-quarter profit of 1.167 billion reais ($220 million) on Thursday, a vast improvement from the same period last year, when the company booked a 48.5-billion-real loss amid coronavirus-related impairments.

Earnings before interest, taxes, depreciation and amortization, or EBITDA, came in at 48.9 billion reais, above the Refinitiv consensus estimate of 45.3 billion reais.

The company was notably silent on any potential changes to its fuel pricing policy. The market remains nervous that the company may depart from its policy of aligning domestic prices with international prices. Luna has said a revision is possible, but that the government would have to foot the bill for any effective subsidies.