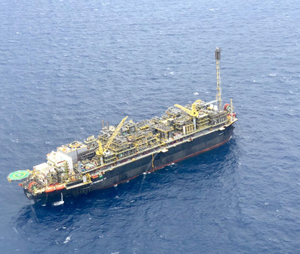 Oil production by Petroleo Brasileiro SA fell 3.5 percent in the first quarter from the same period a year before, according to Brazil's oil regulator ANP, which attributed the fall to a number of scheduled and unscheduled stoppages.

In a statement, the regulator said the production declines were due to maintenance work and other interruptions in January and February at platforms and FPSO units owned by Petrobras, as the firm is known.

The fall in production, to roughly 2.4 million barrels of oil equivalent per day (boe/d), comes even as Petrobras initiated operations at three platforms in March in Brazil's offshore, pre-salt oil area, considered the nation's most prolific oil producing zone.

Production at Petrobras has been hit by a decline in investments in the firm's more traditional onshore and 'post-salt' offshore assets. The company is also divesting many of its legacy oilfields, but relatively few of those sales have so far closed.

In Brazil as a whole, oil production rose 0.96 percent in annual terms to 3.261 million boe/d in March, the ANP said.

While Petrobras has historically divulged monthly production statistics, it has not done so since January. On Thursday evening, the firm informed Reuters it would shift to quarterly reporting of oil production.

The company is due to report its first quarter financial results on May 7.