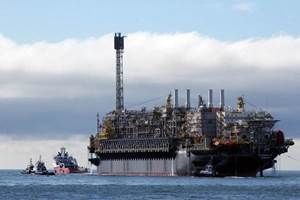 The oil and gas company said that with a daily capacity to process up to 150,000 barrels of oil and compress up to 6 million cubic meters of natural gas, P-76 will contribute to the growth of the companies' production. It is the second platform to start-up in 2019, out of a total of four planned for this year, in line with Petrobras Strategic Plan.

The Búzios field, in the pre-salt of the Santos Basin, was discovered in 2010 and is the main field under the Transfer of Rights Agreement. The field started production in April 2018, and another platform is expected to start-up this year, the P-77.

The FPSO (floating, production, storage and offloading unit of oil and gas) is located approximately 180 km off the coast of the state of Rio de Janeiro, at a water depth of 2,030 meters.

The project provides for its interconnection to ten producing wells and seven injector wells. The offload of oil production will be made by relief vessels, while gas production will be drained through the pre-salt pipeline routes.

The completion of the hull conversion, the integration of the modules and the final commissioning of the unit were carried out in Paraná.