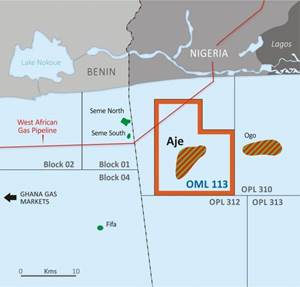 Panoro Energy said it will no longer operate in Nigeria following a deal to sell its interest in the OML 113 offshore license to PetroNor E&P for $10 million plus a contingent consideration of up to $25 million based on future production volumes.

The independent exploration and production company announced on Monday that PetroNor E&P will acquire subsidiaries holding 100% shares in Pan-Petroleum Aje (Pan Aje), which holds a 12.1913% economic stake in OML 113, including the producing Aje field and a number of exploration prospects.

OML 113 located in the western part of offshore Nigeria adjacent to the Benin border.

The Aje Field was discovered in 1997 in water depths ranging from 100-1,500 meters. Unlike the majority of Nigerian Fields which are productive from Tertiary age sandstones, Aje has multiple oil, gas and gas condensate reservoirs in the Turonian, Cenomanian and Albian age sandstones. Five wells have been drilled to date on the Aje Field. Aje-1 and Aje-2 tested oil and gas condensate at high rates from the Turonian and Cenomanian reservoirs and Aje-4 confirmed the productivity of these reservoirs and discovered an additional deeper Albian age reservoir. Aje-5 was drilled in 2015 as a development well for the Cenomanian oil reservoir. The OML 113 license has full 3D seismic coverage from surveys acquired in 1997 and 2014.

The Aje field started production in April 2016 from two wells in the Cenomanian reservoir, Aje-4 and Aje-5, with oil processed and exported from a leased floating production, storage and offloading unit (FPSO), the Front Puffin. The field has continued to produce from these wells to date, with Aje-4 currently producing from the Cenomanian reservoir and Aje-5 producing from a re-completion in the oil rim of the Turonian reservoir. On a net basis the Aje field produced around 350 bopd during 2018.

John Hamilton, Chief Executive Officer of Panoro said, “We are extremely pleased to have reached this win-win agreement with PetroNor that perfectly suits both parties’ ambitions. Aje was a non-core asset for Panoro and allows us to further focus on expanding our organic operations in Tunisia and Gabon while retaining exposure to the considerable upside at OML 113 through the deferred consideration. We are very confident that PetroNor has the technical and financial capabilities along with the depth of expertise and vision to advance further the next ambitious development phases of Aje in a smooth and efficient aligned partnership with the operator, YFP.”

PetroNor has an option to pay a portion of the share consideration in cash, in an event PetroNor’s share price reduces to less than $0.13 per share (based on the current number of shares in issue), at the time of completion of the transaction.

Panoro said it expects to generate a net gain on the transaction, and it intends to declare a special dividend and distribute the share consideration.

Julien Balkany, Chairman of Panoro, said, “Panoro has been reviewing options in relation to its Nigerian assets with the objective of potentially unlocking value of OML 113 for its shareholders. This divestment is consistent with Panoro’s strategy to optimize its E&P portfolio. In addition, through the contemplated distribution of PetroNor shares to Panoro shareholders, this transaction provides Panoro’s shareholders with the opportunity to directly retain exposure to OML 113. Panoro remains fully committed to its growth strategy in Africa for the benefit of its shareholders.”

The deal remains subject to agreements between PetroNor and YFP, the authorization of the Nigerian Department of Petroleum Resources and the consent of the Nigerian Minister of Petroleum Resources, which is expected to take several months to secure. The parties have agreed upon a long stop date of December 31, 2020, after which either party is entitled to terminate the transaction.