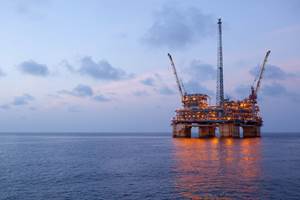 Oil prices hit a six-week high on Thursday as oil rigs in the Gulf of Mexico were evacuated ahead of a storm, while an incident with a British tanker in the Middle East highlighted tensions in the region.

A day after Iran warned Britain would face "consequences" over the seizure of an Iranian oil tanker, three Iranian vessels tried to block the passage of a British ship run by BP through the Strait of Hormuz, the British government said. They withdrew after warnings from a British warship.

"What happened was partially expected. We pointed out last week that Iran was likely to do something of the sort," Petromatrix oil analyst Olivier Jakob said.

"They might have created a little bit of disturbance, but nothing came out of it. For now we are in the process of intimidation and psychological warfare ... To have a strong price reaction you need something to really happen."

U.S. oil producers on Wednesday cut nearly a third of their output in the Gulf of Mexico ahead of what could be one of the first major storms of the Atlantic hurricane season.

However, oil prices gave up some gains as OPEC forecast on Thursday that world demand for its crude would decline next year as rivals pumped more, pointing to the return of a surplus despite an OPEC-led pact to restrain supplies.