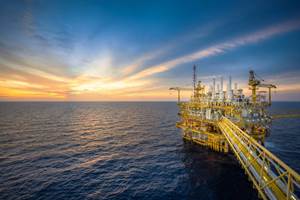 Offshore oil and gas project commitments are expected to not only recover going forward, but their number is also set to reach a new record in the five-year period towards 2025 - cumulatively almost 600 projects - Rystad Energy, a Norwegian energy industry intelligence group said in a report this week.

According to Rystad, deepwater commitments will experience the largest growth because, Rystad says, their cost has now become much more competitive against greenfield continental shelf reserves.

Rystad Energy said that the difference in the cost of greenfield shelf reserves compared to deepwater has fallen dramatically from the highs seen in 2014 – from over $5 per barrel of oil equivalent to only around $1/boe in 2020.

For the purpose of its analysis, Rystad has defined that a project is committed when more than 25% of its overall greenfield capex is awarded through contracts.

Although shallow water commitments will take the largest share of the total offshore project pie, rising to 356 from just 206 in the last five years, the increase is more modest – about 10% – compared to the 2011-2015 count of 323 projects. The most impressive growth is that of deepwater commitments, with the number of projects rising to 181, from 106 in 2016-2020 and 115 in the five years before that, Rystad added.

Ultra-deepwater commitments will also tick up but not by similar margins, as costs still bite.

"We are expecting about 55 [ultra-deepwater] projects from this year until 2025, up from 43 in the previous five years," Rystad said 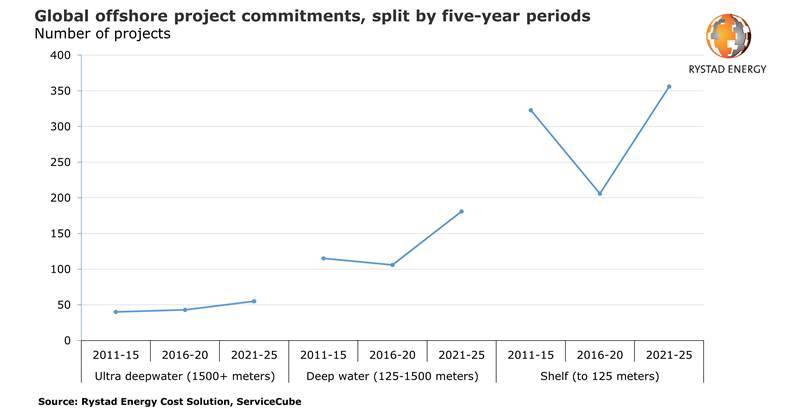 "The growth in commitments will stimulate rising demand for floating production, storage and offloading vessels as well as subsea tiebacks. The search for large new fields in deep and remote waters became much more economically viable after dayrates for drilling rigs and offshore supply vessels fell in the wake of the oil price crash in 2014 and 2015. This offers significant support for companies interested in deepwater,” says Rajiv Chandrasekhar, energy service analyst at Rystad Energy.

Rystad says that due to the expected growth in E&P activity over the next five years, the number of new offshore facilities is set to increase, meaning floaters and subsea tiebacks are also projected to rise.

"E&Ps are likely to prefer leased FPSOs over owned units – based on both reported data and the assumptions made by operators. Rystad Energy expects a 50% rise in the number of owned FPSOs expected to be used on upcoming projects till 2025," the company said.

Subsea tiebacks, Rystad said, are significantly less capital-intensive compared to fixed and floater technologies, and they also facilitate quicker turn-around times from the start of field development to first oil.

Furthermore, Rystad added, the large number of pre-existing fixed facilities has made it progressively easier to opt for subsea production systems that can be tied back to these platforms. Even in shallow waters below 125 meters, subsea and floater commitments will likely see their market share rise considerably over the next five years, though fixed platforms will still remain the dominant solution for shelf developments, the energy intelligence firm added.

In terms of greenfield expenditure, Rystad expects we expect offshore project commitments in 2021-25 to be worth more than $480 billion, eclipsing the 2016-20 tally of around $320 billion by 50%.

"However, this is still well off the pace set in the 2011-15 period, when around $673 billion worth of commitments were made," the company said.

Region-wise, Rystad expects ultra-deepwater activity to be primarily concentrated in South America, with over 50% of the total committed value, while the Middle East is likely to lead shelf developments with 40% of the total value. Deepwater investments are forecast to be less dependent on any particular region, with a quarter of greenfield expenditure expected in Europe, Rystad concluded.