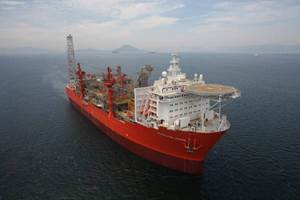 Oil major Shell has received regulatory approval for the removal of the Petrojarl Knarr FPSO and seabed structures on the Knarr field, offshore Norway.

Discovered in 2008, Knarr is a field in the northern part of the North Sea, 50 kilometers northeast of the Snorre field. It started production in 2015 via the Petrojarl Knarr FPSO, which has an oil production capacity of 63,000 b/d. The water depth at the site is 400 meters.

The development, which will soon cease production, comprises the Petrojarl Knarr FPSO and two subsea templates, including six wells for production and injection. The Knarr field consists of two segments, Knarr West and Knarr Central with one template on each structure. In April 2020 Shell extended the FPSO contract to March 2022.

According to Norsk Petroleum, Knarr produces oil from Lower Jurassic sandstone in the Cook Formation, from the reservoirs located at a depth of 3,800 meters.

Produced oil is processed and stored on the Knarr FPSO and offloaded to shuttle tankers for export. Gas is exported via the Far North Liquids and Associated Gas System (FLAGS) to St Fergus in the UK.

A decommissioning plan was submitted to the Norwegian authorities in 2020, and the Petroleum Safety Authority (PSA) has this week said it has given A/S Norske Shell consent for the removal of and disposal of the facilities from the field.

The Norwegian Petroleum Act requires the developer of a field to pay for and to carry out – including full or partial removal of facilities and equipment after the production period has ended.

Namely, Norway's Equinor last month confirmed to Offshore Engineer that it had signed an agreement with FPSO owner Altera Infrastructure that could see the Petrojarl Knarr FPSO redeployed at the long-stalled Rosebank project in the UK North Sea.

The FPSO is currently producing oil from Shell's Knarr field, offshore Norway, where it has been since early 2015.

The Rosebank field is located 130 km northwest of the Shetland Islands in 1115 m water depth and is seen as one of the largest undeveloped oil fields in the North Sea, which could hold more than 300 million barrels of recoverable oil.

It was discovered in 2004 and in 2019 Equinor acquired Chevron’s 40 percent operated interest in the Rosebank project in the West of Shetland region of the U.K. continental shelf, but the project has yet to be developed.

The sale marked Chevron's full exit from the project, for which it had planned to deploy a newbuild FPSO with a 100,000 b/d oil, 80 mmcf/d gas production capacity, with storage for about 1 million barrels. This was is to be the deepest moored facility on the UK Continental Shelf. Prior to the sale to Equinor, Chevron had planned to have the field online in 2024.

In a statement given to Offshore Engineer in February, an Equinor spokesperson said: "It’s still early days, we’re still quite a bit away from FID – but I can confirm that we have signed a FEED agreement with Altera for the redeployment of Petrojarl Knarr at Rosebank."

Altera said in an emailed statement: "We are pleased to be part of this project. The Rosebank field with its harsh environment is a good fit for the asset and we look forward to working closely with Equinor through FEED-phase towards FID to ensure a potential redeployment of the Petrojarl Knarr with sustainable, low-emission solutions."

Back in mid-2019, before anybody knew there'd be a global pandemic, Equinor and its partners said they expected to reach a final investment decision (FID) for Rosebank by May 2022.

It remains unclear what the targeted FID, or start-up date for Rosebank is today. WorldEnergyReports FPSO Database shows 2027/28 as the estimated production start-up date.

According to Altera's 4Q report released earlier in February, the Petrojarl Knarr FPSO is expected to stop production on the Knarr field in the North Sea around May 1, 2022, and start decommissioning activities.