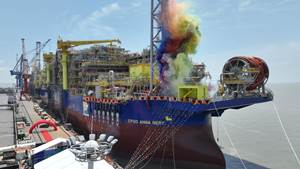 The FPSO Anna Nery is currently undergoing final conversion works and is going to set sail for Brazil in the third quarter, where it will be deployed at the Marlim Field located in the eastern part of the Campos Basin, about 150km offshore Rio de Janeiro.

The FPSO will be stopping for a few days in Singapore and Mauritius for crew change and fresh supplies. The FPSO Anna Nery will be able to produce 70,000 barrels of oil and 4 million cubic meters of gas per day.

"FPSO Anna Nery is our maiden asset in Brazil, and the first of three Brazil-bound offshore production projects that Yinson is currently undertaking. We are humbled by the trust that Petrobras has placed in us deliver on this important energy infrastructure project and we look forward to achieving final delivery.”

Letters of Intent for the FPSO Anna Nery project were awarded to Yinson by Petrobras in October 2019, followed by firm contract execution in March 2020. In April 2020, Sumitomo took part in the project with a 25% stake. The estimated aggregate value of the FPSO Anna Nery project is $5.4 billion, with a contract period of 25 years from the date of the final acceptance.