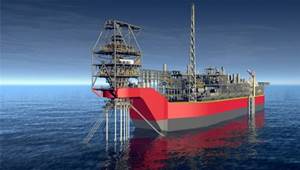 The two DKW1600 wire luffing lattice boom cranes will have a maximum lifting capacity of 30 metric tons and a maximum outreach of 35 meters.

Sverre  Mowinckel-Nilsen, Sales Director PALFINGER Marine and Handling Solutions said:"We are proud to be selected as the supplier of the main cranes onboard the first FPSO for Senegalese waters and we are looking forward  to continuing our long-term relationship with MODEC."

As mentioned earlier, the FPSO will be deployed at the Sangomar field, located around 100 km south of  Dakar, Senegal. The FPSO is expected to be delivered in 2023.