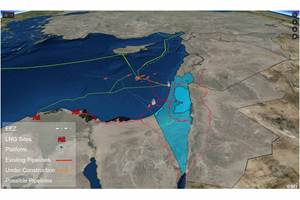 The gas platform for the Leviathan natural gas field is on its way to Israel from the Gulf of Mexico, the partners in the project said on Sunday.

The first of four barges transporting the production structure units has left Texas and the other three will set sail in the coming weeks. In September, all the units will be installed on the jacket of the platform already in place 10 kilometers from Israel's shore.

After connecting the units to the platform, Noble Energy, one of Leviathan's partners, will start a series of commissioning tests before initiating commercial gas flow to the domestic market before the end of 2019.

Earlier this month, testing of a subsea natural gas pipeline to Egypt was completed, in the wake of a deal to export $15 billion in gas to a customer in Egypt.

Leviathan, with 22 trillion cubic feet of reserves, was discovered in 2010 and is one of the world’s largest gas discoveries of the past decade.