Karoon Eyes Growth in Brazil with Own Oil Fields, Acquisitions 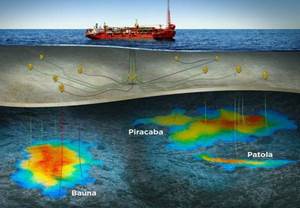 Karoon Energy sees strong growth prospects in Brazil, where it started producing oil last year, working to more than double output by 2023 and considering two options to develop another field by mid-decade, its chief executive said on Monday.

Karoon produced an average of just over 13,000 barrels per day (bpd) in the eight months to June 30 after buying the Bauna oil field from Petrobras for $665 million and booked oil sales revenue of $170.8 million and a small net profit.

"The result reflects quite a big transformation for Karoon through the year," said Chief Executive Julian Fowles, who took the reins 10 months ago and has appointed a new chief financial officer and new head to run operations in Brazil.

Karoon aims to add between 15,000 and 20,000 bpd by early 2023 by boosting output from existing wells at Bauna and then connecting in the Patola field, a project expected to cost around $185 million.

That is going to be largely funded by a $160 million debt facility, the company's first, which it has lined up with Deutsche Bank, ING, Macquarie and Royal Dutch Shell, and positions it to secure further debt for acquisitions.

"We've really now got a bit of a presence in the debt market. And we think that anything that we do in the future inorganically would have a large component of debt involved in it," Fowles told Reuters.

He declined to comment on whether Karoon will be bidding for the Albacora and Albacora Leste fields that Petrobras has put up for sale.

Karoon is looking at developing the Neon field, either by building a 50 km to 60 km undersea pipeline to tie it into the Bauna floating production and storage and offloading (FPSO) vessel or by installing an FPSO on top of the Neon field.

Fowles said tying Neon into the Bauna FPSO is looking increasingly attractive, as it will save on capital costs and operating costs and could help it extend the life of the Bauna field by spreading fixed costs across the two fields.

If the company went ahead with developing Neon, first production would be around 2025 or 2026, Fowles said.

Karoon is working on a strategy to help cut emissions from its operations and seek offsets, which it plans to outline in October, as it looks to attract more environmentally-conscious lenders and investors.