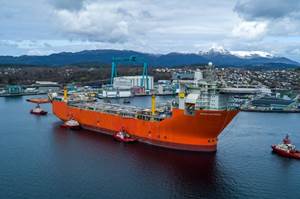 Equinor's Johan Castberg floating production, storage, and offloading (FPSO) vessel suffered only minor damage during a fire on Wednesday, and the project's timeline will not be affected, a company spokesperson said on Thursday.

The vessel is under construction at a shipyard in western Norway. Workers were evacuated during the fire, and there were no reports of injuries.

"With the exception of a small area, which is still closed-off, work on the project continues as normal," Equinor said in a statement to Reuters.

The Arctic Johan Castberg oilfield is scheduled to start production in the fourth quarter of 2024, the Norwegian government said last year.