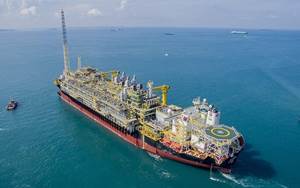 MODEC, Mitsui & Co., Mitsui O.S.K. Lines (MOL), and Marubeni Corporation have agreed that Mitsui, MOL, and Marubeni will invest in a long-term charter business currently promoted by MODEC for the purpose of providing  FPSO for use on the Búzios field off the coast of Brazil.

Based on these agreements, Mitsui, MOL and Marubeni will invest in Buzios5 MV32 B.V. (MV32), a Dutch company established by MODEC, and the Companies will proceed with the Project jointly.

MV32 has entered into a long-term charter agreement for the deployment of the FPSO with Petróleo Brasileiro S.A. (Petrobras), the Brazilian state oil company.

The FPSO will be chartered for 21 years under this charter agreement which was signed on 24th September 2019.

The FPSO will be named FPSO Almirante Barroso MV32 and will be deployed at the Búzios field located in the giant "pre-salt" region of the Santos Basin.

The field is located approximately 180 kilometers from Rio de Janeiro, in the southeast coast of Brazil. FPSO will be moored in 1,900 meters water depth, in the year of 2022.

The Project is the seventh occasion under which the Companies have collaborated to operate FPSOs in Brazil.