Italy's Commissioner Confident in a Timely Decision on New FSRU 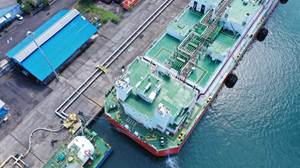 Italy's commissioner for the set up of a new regasification terminal is confident the infrastructure could get the green light by the end of October, in time for extending the country's LNG capacity at the beginning of 2023.

Under the government's energy plan, the new floating storage and regasification unit (FSRU) should be operational by the end of March next year to increase the country's LNG imports and make up for a shortfall of Russian imports.

The infrastructure, which was bought in June by gas grid operator Snam SRG.MI, is considered essential by Rome but has encountered fierce opposition by the mayor of Piombino, the city on the west coast of Italy where it should be moored.

"I see the conditions for the timing to be met... we are well ahead in order to arrive at a meeting scheduled for October 21 to give the authorization, which must arrive by Oct. 27," said commissioner Eugenio Giani on Monday, at the end of the first gathering to discuss about the terminal.

The commissioner, appointed by the government to speed up the permitting process, said that during the meeting with local authorities and associations, only the Piombino mayor expressed a clear opposition, while other entities put forward proposals and requests that Snam will have to address by Oct. 7.

After the meeting that took place in Florence, Piombino's mayor said the city could even challenge a positive decision by the commissioner in court.

A possible appeal by the municipality of Piombino would not block the set up of the vessel, Giani said.