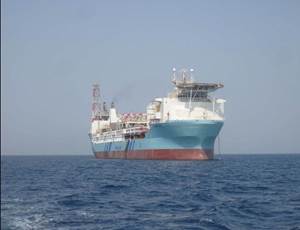 The UK based oil and gas company Hurricane Energy PLC said it was unable to complete the buoy hook-up operation in the offshore UK Lancaster field due to problems with the rope.

According to a press note, the Aoka Mizu FPSO has been forced to return to the Cromarty Firth.

"During the buoy hook-up operation on 18 January 2019, the rope being used to pull in the buoy became snagged and it was not possible to complete the hook-up operation. The rope has now been freed and the buoy returned to its starting position," said the release from the company focused on hydrocarbon resources in naturally fractured basement reservoirs.

"Due to the predicted deterioration in weather conditions, the Aoka Mizu FPSO has returned to the Cromarty Firth to complete remediation work on the buoy pull-in system and prepare for the next opportunity to pull in the buoy," it added.

Hurricane said it will issue a further announcement once the hook-up has been successfully completed.

According to the company, first oil is scheduled for the first half of 2019. Lancaster — 100%-owned by Hurricane — is thought to hold 523 million stock tank barrels of oil.