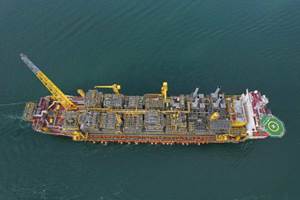 Guyana is getting ready to raise requirements on oil operators to protect the nation against spills and future removal costs of production platforms, the head of its environmental agency told Reuters.

But as the newest South American crude-producing nation fashions a regulatory framework for its oil industry, it is pressing a consortium led by Exxon Mobil Corp for greater security, said Kemraj Parsram, head of Guyana's Environmental Protection Agency, in a interview last week.

Under discussion with Exxon are a draft agreement that would add parent guarantee and revise the type of events covered in the Exxon group's $5 billion self-insurance policy, he said.

"We have to make sure there is adequate coverage," said Parsram.

Exxon does not comment on commercial and regulatory discussions but follows international environmental standards where laws and regulations do not exist and goes beyond those where practical, spokesperson Meghan Macdonald said.

Its existing agreement has "extensive assurances" and requires contractors "take responsibility for any adverse event," she said.

The talks with Exxon, the operator in a group that includes Chinese state-run oil company CNOOC and Hess Corp, come amid environmental permit reviews for a third project in the massive Stabroek block.

"We can make changes to any of those permits, it's what we call new standards," he said. "I would love to have it wrapped up in time for when, if we decide, to approve Yellowtail," the third project, Parsram said.

"Insurance is just one of many sources of financing that Exxon Mobil could utilize to pay for response activities, and those activities would not be delayed by discussions with insurers," Macdonald said.

As Guyana never demanded financial assurance for platform decommissioning, such costs are not covered by the existing policy.

"We will look at that. All that was part of the discussion," Parsram said.