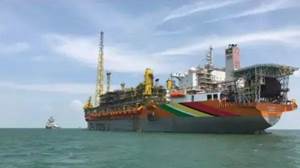 Guyana is aiming to complete talks with the Exxon Mobil Corp-led consortium producing oil off its coast over crude pricing, lifting costs, and scheduling before the government exports its first cargo, energy director Mark Bynoe said on Monday.

Exxon Mobil and partners Hess Corp and China's CNOOC Ltd inaugurated oil output in December at the prolific offshore Stabroek block, aiming to ramp it up to 120,000 barrels per day (bpd) this year. Guyana had no prior history of crude production.

He added that the Liza-1 field, the first to produce in the massive 26,800-square kilometer (6.6 million-acre) concession, has produced more than 2.7 million barrels of crude since output began.

"The (Department of Energy) and its sister agencies are continuing to work with the operator and its co-ventures to complete Article 13 of the PSA," Bynoe told reporters, referring to the section of the production sharing agreement outlining how to calculate export prices.

"Reaching consensus is necessary," he added. Exxon said in a statement, "We will continue to work with the government of Guyana to execute its preferred option for lifting and marketing crude, and we will comply with all applicable laws and regulations."

The first cargo of Liza light sweet crude, entitled to Exxon, set sail in January on tanker Yannis P. Exxon discharged about 1 million barrels of the oil at a Texas port for its own refining system. The second cargo was sold by Exxon to an undisclosed customer.

The tanker Eagle San Antonio set sail last week for Panama, according to Refinitiv Eikon data. It has not discharged. A third tanker scheduled to export Liza crude is underway to Exxon's production vessel, according to the Eikon data.

This cargo, the first entitled to Guyana's government, was sold in a December tender to Royal Dutch Shell. Shell plans to take two more cargos of Liza crude through March. The destination of those shipments is unknown, but Guyana has said tenders will be replaced by a competitive process to chose a marketing agent for the government's share of oil.

The government plans to launch this month its search for an energy firm or oil trader. Bynoe did not provide an update on when that process would officially begin. The ramp-up of Guyana's nascent oil industry comes ahead of March 2 presidential elections.

The opposition has pledged to review oil deals signed under President David Granger's government if it wins the vote.