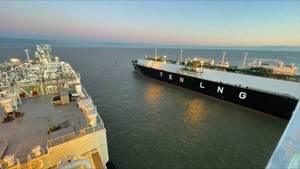 A German environmental group has lodged a complaint calling for the operating licence of a new floating liquefied natural gas (LNG) terminal at Wilhelmshaven to be shortened by a decade citing its discharging of chlorine and risks to Germany's climate targets.

Germany plans to use so-called Floating Storage and Regasification Unit (FSRUs) to import LNG as it weans itself off of piped Russian gas.

The group, Deutsche Umwelthilfe (DUH), said in a complaint to the commercial regulator in the state of Lower Saxony that the licence for the unit at Wilhelmshaven should end in 2032, not 2042.

"It must be clear that compliance with the Paris climate agreement is non-negotiable. The lifespan of the LNG terminal must be limited to a maximum of 10 years," said DUH Managing Director Sascha Mueller-Kraenner.

The DUH objects to the discharge of large quantities of environmentally harmful chlorine, used for cleaning on the Hoegh Esperanza FSRU operated by Uniper.

The economy ministry has taken note of the challenge, a spokesperson said on Wednesday at a regular news conference in Berlin, adding that any decision was "a matter for the relevant local authorities".

The FSRU, chartered by the German government, was put into operation in the North Sea port in December and can hold around 165,000 cubic metres of LNG. It is one of several which Germany plans to use to replace Russian gas supply in the wake of Moscow's invasion of Ukraine last February. The complaint, which comes as police started clearing protesters opposed to the expansion of an opencast lignite mine, underscores growing tensions over Berlin's climate policy.

Environmentalists say climate goals are being neglected during an energy crisis caused by Russia's invasion of Ukraine, forcing a return to dirtier fuels. "There must be no environmental discounts when approving plants for liquefied natural gas," the DUH's Mueller-Kraenner said, adding that numerous permanent licences for fossil fuel projects would jeopardise Germany's climate goals.