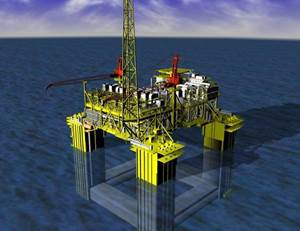 The scope of this work includes pre-commissioning and commissioning planning and execution at both the onshore fabrication site and offshore. The GATE commissioning team will also support initial startup activities offshore.

The Salamanca FPS will be located in Block 689 of the Keathley Canyon to tap into the Leon and Castile discoveries. The deepwater platform sits at approximately 6,400 ft, capable of producing 60,000 BOPD, 25,000 BWPD, and 40 MMSCFD of natural gas.

Mark Myhre, President of GATE Commissioning, said, "This Salamanca award exemplifies our relationship and partnership with LLOG following our success on the Delta House project. GATE Energy continues to enjoy our strong position in the commissioning segment with 10 major deepwater commissioning projects awarded to us in just the past 9 years. Our culture and backlog are strong with the investment in our people and processes continuing to show dividends. We look forward to ensuring LLOG succeeds on Salamanca and are excited for the future of our people, clients, and industry."

To remind, LLOG in May announced the planned development of the Salamanca floating production facility to be used to develop two offshore discoveries in the U.S. Gulf of Mexico.

It said at the time that the Salamanca is comprised of a "uniquely" designed Floating Production Unit (“FPU”) that will be created from the refurbishment of a former GOM production facility that was previously decommissioned. It, at the time, did not say which facility exactly it would use for the project.

However, information from World Energy Reports shows that LLOG will use the decommissioned Independence Hub production semi for the project.

"The unit, which was decommissioned in 2019 and has been in storage in Ingleside TX since, will be acquired from Genesis Energy for $40 million," WER said in its July FPS report.