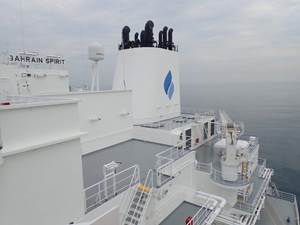 Teekay LNG’s first Floating Storage Unit (FSU) has been successfully delivered to charterer Bahrain LNG. The vessel delivered from the yard at the end of August, before going on hire on 19 September, 2018.

The vessel will be used to support Bahrain LNG in providing an LNG receiving and regasification terminal in Bahrain. The project is 30% owned by Teekay LNG Partners (TGP) and is expected to commence commercial operation in early 2019.

The vessel will be used to support Bahrain LNG in providing an LNG receiving and regasification terminal in Bahrain.

Bahrain LNG WLL is jointly owned by the Oil and Gas Holding Company (nogaholding) and a consortium consisting of Teekay LNG Partners L.P. (Teekay LNG), Gulf Investment Corporation (GIC) and Samsung C&T (Samsung). Financing a project of this size and complexity is a landmark in the regional financial markets.

The project was awarded to the Teekay LNG-GIC-Samsung consortium in December 2015 by the National Oil & Gas Authority (NOGA) of Bahrain following an international competitive tendering process. The project is being developed to supplement local gas production in Bahrain and ensure capacity to meet peak seasonal gas demand and industrial growth. It will also enable Bahrain to procure internationally-traded LNG on a competitive basis.

The project will have a capacity of 800 million standard cubic feet per day and will be owned and, once completed in early 2019, operated under a twenty-year agreement. It will comprise a Floating Storage Unit (FSU), an offshore LNG receiving jetty and breakwater, an adjacent regasification platform, subsea gas pipelines from the platform to shore, an onshore gas receiving facility, and an onshore nitrogen production facility.