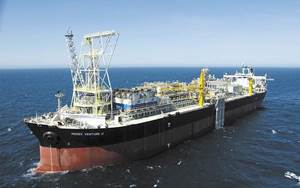 The global floating production storage and offloading (FPSO) market was valued at around US$ 25 Bn in 2017 and is anticipated to expand at a CAGR of around 12% from 2018 to 2026, said a new report.

Based on type, the global FPSO market can be divided into converted, new-build, and redeployed, said a new report by Transparency Market Research (TMR) on FPSO market.

In terms of value, the converted segment dominated the global FPSO market in 2017. Low capital requirement and faster deployment of converted FPSOs as compared to new-build FPSOs are likely to drive the segment during the forecast period.

FPSO is a converted tanker or a purpose built vessel that can be multi-hull production semi-submersible, cylindrical shaped production spar/ mono hull, or ship shaped. In FPSOs, hydrocarbon processing facilities are installed that process well stream fluids into oil, LPG, and LNG.

Double- hull tankers can be used for HGO cargo with capacity of more than 5000 tons DWT. Currently, offshore oil and gas exploration activities are on the rise, which increases the capacity of FPSOs. Thus, the double-hull segment is expected to account for a major market share during the forecast period.

The towed segment dominates the FPSO market. Towed FPSOs are widely used because the shape of FPSOs may not be such that they can support easy propulsion and navigation. The towed segment accounted for more than 75% market share in 2017.

In terms of region, the global FPSO market can be divided into North America, Latin America, Europe, Asia Pacific, and Middle East & Africa. Rise in demand for FPSOs is attributed to increasing investment in offshore exploration of oil and gas in deep water and ultra-deep water areas in regions primarily including Africa and Latin America. Major offshore fields located on Brazilian coasts include Santos, Campos, and Espirito Santo basins among others. Brazil accounted for more than 50 FPSOs in 2017.