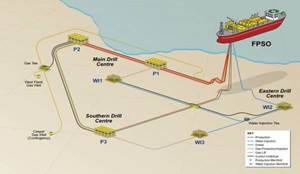 The Falkland Islands government has agreed to extend the terms of several offshore oil and gas licenses, including the one containing the undeveloped Sea Lion field, oil and gas company Rockhopper has informed.

To remind, Premier Oil, the operator of the Sea Lion development, in May last year suspended work on the $1.8 billion Sea Lion offshore oil project would "to minimize ongoing spend in light of the current market conditions."

Premier has since then entered into a merger agreement with Chrysaor. The merger is expected to be complete by the end of the month, with the merged entity bearing a new name - Harbour Energy.

In a statement on Friday, Rockhopper, a partner in the Sea Lion license and several others in the Falkland Islands, said that following discussions between the joint venture partners, Harbour Energy and the Falkland Islands Government ("FIG"), FIG has agreed to extend each of the Company's North Falkland Basin Petroleum Licences, including the Sea Lion Discovery Area, until 1 November 2022, with no additional licence commitments. The licenses were previously due to expire on 1 May 2021.

Samuel Moody, Chief Executive Officer, commented: "The company is grateful to the Falkland Islands Government for the extension of its North Falkland Basin licence interests and continued support of the Sea Lion project.

"The proposed merger of Premier Oil and Chrysaor to create Harbour Energy brings a financially stronger operator to the project. This, combined with the proposed entry of Navitas Petroleum to Sea Lion, creates a solid operational and financial foundation giving the project the strongest possible chance of progressing."

Rockhopper and Premier Oil in January 2020 entered into a deal with the Israeli firm Navitas that would see Navitas eventually obtaining a 30% interest in the Sea Lion offshore blocks.

Then, the collapse in oil prices and the global pandemic ensued, affecting the deal's completion. Still, Rockhopper in March 2020 maintained it was confident the farm-out would go ahead despite the low oil prices and COVID-10 uncertainty.

In November 2020, the three companies agreed to extend the exclusivity period for the latter's farm-in into the project until September 30, 2021.

Premier Oil is the field operator and has 60% interest. Rockhopper has 40%. The Sea Lion block is located 220 km north of the Falkland Islands in 450 m water depth.

The Sea Lion oil discovery was made back in 2010, but the project has been delayed several times. In 2014, Premier and Rockhopper targeted first oil for 2019; however, years later, the field development has yet to reach a final investment decision.