Exxon's Guyana Oil Deal in Focus Ahead of Election 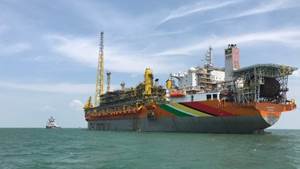 A report by a nonprofit watchdog group critical of Exxon Mobil Corp's oil contract with Guyana has rekindled a debate over whether the deal is too generous to the company, just a month before a crucial presidential election.

In a report published Monday, London-based anti-corruption group Global Witness said the U.S. oil major's 40-year deal to produce crude in the offshore Stabroek block would deprive the government of up to $55 billion in revenue over the life of the contract, compared with deals in other countries.

The discovery of more than 8 billion barrels of oil and gas offshore Guyana by an Exxon-led consortium, which includes Hess Corp and China's CNOOC, will transform the economy of the poor South American country.

With fewer than 800,000 inhabitants, the former British colony is seen as a test for whether oil revenue can spur sustainable development in a country lacking strong institutions.

Global Witness' finding could boost the opposition People's Progressive Party's (PPP) contention that President David Granger's government was too generous in a 2016 contract re-negotiation with the consortium, which resulted in a 2% royalty and a 50% profit share for the state.

The group had previously sent individuals named in the report summaries, and before publication Granger's allies sought to limit damage ahead of the March 2 election, which will decide which party oversees the first five years of an oil boom.

"You have to decide whether you are going to be fooled a couple of days before the elections by some set of jokers," Foreign Secretary Carl Greenidge said last week at a rally in the eastern town of New Amsterdam for Granger's APNU-AFC coalition, calling Global Witness a "very controversial NGO."

Global Witness said 52% of oil revenues would flow to state coffers in Guyana, below the 65%-85% range it said the International Monetary Fund (IMF) surveys showed was "normal." It said Guyana would receive $168 billion over the life of the deal, rather than the $223 billion it considered fair.

A 2012 IMF paper found government shares of oil revenues tended to fall in that range, and policies raising less "may be cause for concern."

A 2019 IMF report on Guyana said the country's macroeconomic outlook was "very favorable" and that oil revenues would improve infrastructure and development.

The government and Exxon both argue favorable fiscal terms were needed to attract investment into an unproven oil play, but the PPP and Global Witness say the government had the upper hand during the 2016 re-negotiation given that Exxon made commercial discoveries in 2015.

"The conclusions are misleading in that they compare Guyana deep water with mature hydrocarbon-producing provinces which naturally have evolved fiscal frameworks reflecting maturity and lower risk profiles," Exxon spokesman Todd Spitler said of the report.

'WHAT DO WE DO WITH THE MONEYS'

To be sure, it is unlikely the election will spur changes to the Exxon deal, as the PPP has stopped short of saying it would renegotiate the contract terms. Hess Chief Executive John Hess said in an investor call last week that both parties were "pretty clear" they would honor the deal.

But the PPP has pledged to improve "contract administration" by requiring Exxon hire more local firms, and promises to re-examine deals with other companies. Opposition leader Bharrat Jagdeo slammed Greenidge's comments and said the government "sold out our interests."

"This is very worrying, that Carl Greenidge will go on an APNU platform in New Amsterdam and try to run down a global organization that tackles corruption, and they talk about clean government and honest government?" Jagdeo, a former president, told reporters last Thursday.

Finance Minister Winston Jordan said Exxon's discovery of oil before the renegotiation of the original agreement - signed during PPP leadership in 1999 - was not the only factor that should be taken into account.

The country has a century-long border dispute with neighboring Venezuela, and in 2013 Venezuela's navy seized a ship exploring for oil on behalf of U.S. oil company Anadarko. That incident added risk, Jordan said. Venezuela in late 2018 halted an Exxon ship conducting a seismic survey.

"We can compare today, tomorrow, about what we got and what we didn't get, but it seems we don't want to compare objective conditions," Jordan said in a late January interview.

Global Witness said in its report it did not believe the Venezuela dispute "can be used to adequately justify the exploitative nature of Exxon's Stabroek deal."

"More energy should be put into what do we do with the moneys," he said. "That discussion has to take precedence."