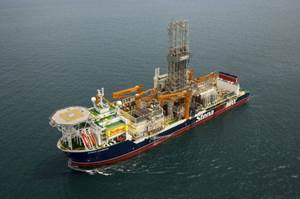 To remind, back in January, ExxonMobil said it had struck its 16th oil discovery in the offshore block in Guyana, boosting recoverable resource base in Guyana to more than 8 billion barrels of oil equivalent.

In its quarterly presentation, where it posted a $320 million loss, Hess said that COVID-19 had related travel restrictions in Guyana, had forced Exxon to temporarily idle two drillships in Guyana, but added that both drillships resumed drilling operations by the end of the second quarter.

"The Stena Carron rig recently completed appraisal drilling at Yellowtail-2, located 1 mile southeast of Yellowtail-1. The well-identified two additional high-quality reservoirs, one adjacent to, and the other below the Yellowtail Field, further demonstrating the world-class quality of this basin," Hess said.

"This additional resource is currently being evaluated and will help form the basis for a potential future development," Hess said.

Further, Hess said that the Noble Don Taylor drillship had started drilling of the Redtail exploration well, which is 1.25 miles northwest of Yellowtail-1 discovery, in July.

The other two drillships, the Noble Bob Douglas and the Noble Tom Madden, are drilling and completing Liza Phase 1 and Phase 2 development wells.

Hess also provided update on the production from the Liza field - the country's only producing oilfield - which was brought online in December 2019, but where output was recently curtailed due to technical problems.

In the update, Hess said that the net production from the Liza Field averaged 22,000 bopd in the second quarter of 2020, but that the field would hit 120,000 bopd mark in August.

Hess said that Exxon was in the process commissioning water injection equipment and bringing natural gas injection fully online that should enable the Liza Destiny FPSO to reach its capacity of 120,000 gross bopd in August.

Phase two of the Liza Field development, which will use the larger 220,000 gross bopd Liza Unity FPSO remains on target to achieve first oil in early 2022, Hess said.

A free webinar will deliver the latest forecasts and market intelligence for the global floating production industry, offering insider access to business and investment opportunities in the deepwater sector.