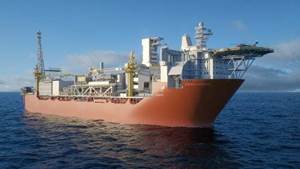 The startup of Equinor's Johan Castberg oilfield in the Arctic Barents Sea will be delayed by one year until the fourth quarter of 2023 due to technical problems, denting its value, Norway's oil and gas safety watchdog said on Tuesday.

The Petroleum Safety Authority said it had identified "serious breaches" of regulations in the construction of the hull for the field's floating production, storage and offloading (FPSO) vessel.

"The project (is) now expected to come on stream in the fourth quarter of 2023, with a consequential reduction in present value as a result of delayed earnings," the PSA said in a statement.

The regulator launched its investigation last year after becoming aware of the problems related to the hull's welding at the Sembcorp Marine (SCM) yard in Singapore.

SCM was not immediately available for comment when contacted by Reuters.

Equinor's own investigation has showed "quality deviations" regarding both welding and welding inspection, and the company has promised to cross-check and repair welds.

"When Johan Castberg comes on stream, there should be no doubt that the vessel is safe," Geir Tungesvik, Equinor's senior vice president for project development, said in April.

The PSA, however, said that it was not technically feasible to identify reliably all potential defects.

"Inaccessible details and areas will have a lower structural reliability than would have been the case if the welding had been done by competent personnel," it added.

The company has previously said Johan Castberg development costs were to increase by 6% or 2.8 billion Norwegian crowns compared to the original estimate, both due to delays and the currency effect.

Equinor has a 50% stake in the project, while partner Vaar Energi, a subsidiary of Eni, holds 30% and Norway's state-owned Petoro owns 20%.