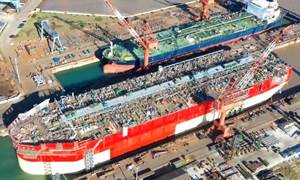 A timelapse video from Energean shows the floating production, storage and offloading unit (FPSO) Energean Power being built over 10 months and then floated out from a COSCO shipyard in Zhoushan, China.

The FPSO, which floated out in mid-September, will head to the Sembcorp Marine Admiralty Yard in Singapore for outfitting and topsides integration work before being deployed as part of the Energean-operated Karish gas project offshore Israel. First gas is expected in the first quarter of 2021.

The $1.4 billion project is being managed by TechnipFMC.