Down But Not Out: Aker Energy Committed to Developing Ghana Offshore Oil Field Despite Delay 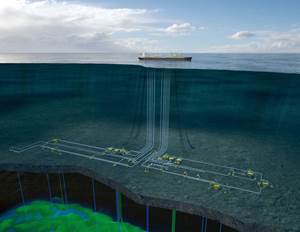 Norwegian oil firm Aker Energy, which operates the Pecan offshore oil field development offshore Ghana, is not giving up on the project, despite having recently delayed a Final Investment Decision 'indefinitely' due to the plunge in oil prices. The development concept, however, is likely to change.

In a statement on Friday, Aker Energy reaffirmed its commitment "to finding a solution that will allow for the commencement of a phased development of the Pecan field offshore Ghana." Drilling operations at Pecan onfirmed contingent resources of 450–550 million barrels of oil equivalent in the Deepwater Tano Cape Three Point block.

Håvard Garseth, the recently appointed CEO of Aker Energy, said Friday: “In a time when most other E&P companies are putting development projects on the shelf due to the COVID-19 situation and historic low oil prices, Aker Energy and our partners, Lukoil, Fueltrade, and GNPC, working closely with the government of Ghana, are actively pursuing a development concept where we can commence phase one of a phased development of the Pecan field,”

“Although we have an altered timeline, we are on our way to finding a development concept with a breakeven price that is sustainable and resilient also in a low oil price environment," Garseth said.

In March, Aker Energy announced that a final investment decision (FID) for the Pecan field development project had been placed on hold, postponing the project.

"While no new date has been set for the FID, the company is working actively to confirm the feasibility of a phased Pecan field development by executing conceptual studies," Aker Energy said.

To remind Aker Energy had in February signed an LOI with Yinson to lease an FPSO for use on the Pecan field for a 10-year period.

According to WorldEnergyReports, Yinson was most likely going to use a recently bought VLCC, and convert it into the Pecan FPSO. However, Aker then in March hit a pause button on the project, and, as things stand, the Yinson deal will not materialize as previously envisioned.

In a statement on Friday, Aker Energy revealed its new plan, which involves a phased approach, and two "redeployed" FPSOs.

"The phased development of the Pecan field and the utilization of a redeployed FPSO vessel will substantially reduce the CAPEX and, hence, reduce the breakeven cost. In addition, it will increase the possibility of reaching a commercially feasible project that will allow for an investment decision. Aker Energy and partners are currently assessing several FPSO candidates for redeployment, and the final selection will be based on technical capabilities and cost," Aker Energy said.

While the original field development concept was based on a centralized FPSO supporting the development of the entire Pecan field, as well as tie-ins of all other area resources, the focus has shifted toward a phased development approach, the Norwegian oil firm said.

The plan is now to start with one FPSO for Pecan in the south and expand to a second FPSO in the north after a few years, with tie-ins of additional discovered resources, Aker Energy said.

The first FPSO would be deployed at around 115 kilometers offshore Ghana over a subsea production system installed in ultra-deep waters in depths ranging from 2,400 to 2,700 meters.

“Along with our partners, we are optimistic that we will establish a workable concept so that we can finally see first oil in the fourth offshore field in Ghana,” says Kadijah Amoah, Country Director in Ghana. “We remain committed to Ghana.”

Aker Energy is the operator of DWT/CTP and has 50% interest in the block. Partners are Lukoil (38%), Fuel Trade (2%) and Ghana National Petroleum Corporation (10%).