Curlew FPSO Arrives in Dundee for Cleaning Ahead of Scrapping 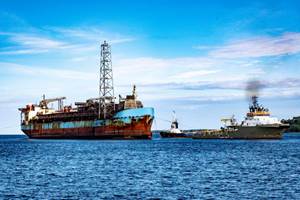 The work will be undertaken in the Port of Dundee by Augean North Sea Services (ANSS), who announced in January it had been awarded the contract to provide specialized industrial cleaning, NORM Decontamination and waste management services for the FPSO before final dismantling, recycling and disposal of the vessel.

During the life of the contract the Curlew FPSO will be berthed in Forth Port’s Dundee facility from where ANSS has recently developed a major decommissioning and decontamination facility, working in full collaboration with Forth Ports and other tenants of the Port of Dundee. The project also involves significant collaboration with Bilfinger Salamis, ANSS said.

The Curlew FPSO, a converted product tanker, was used by Shell on the Curlew and Kyle fields in the Central North Sea offshore the UK. It had began producing in November 1997, according to World Energy Reports.

Shell submitted a draft decommissioning program for Curlew to the Department for Business, Energy and Industrial Strategy (BEIS) in June 2018.