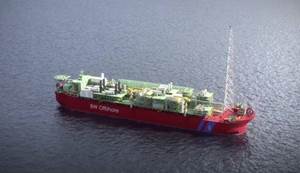 FPSO supplier BW Offshore has secured a $1.15 billion loan for the construction and operation of the FPSO for Australia-based Santos' Barossa offshore gas field.

Earlier this year Santos and BW Offshore signed a contract for the delivery of an FPSO for the Barossa gas field, located 300 kilometers offshore Darwin in Australia.

The Lease and Operate contract has a firm period of 15 years, with 10 years of options. The firm period contract value is USD 4.6 billion. BW Offshore is responsible for the engineering, procurement, construction, installation, and operation of the FPSO.

In a statement on Tuesday, BW Offshore said that the combined construction and long-term debt facility had been provided by a syndicate of nine international banks.

The $1.15 billion loan will be gradually drawn over the course of the project period.

"The financing will become non-recourse once the FPSO has been completed and the pre-completion guarantee has been released. The facility has a tenor of 14 years with a balloon at maturity. The loan carries a base interest rate plus 2.50% margin during construction and 2.25% margin during the operational phase," BW Offshore said.

The FPSO will be turret moored with a newly built hull based on BW Offshore's RapidFramework design. According to BW Offshore, its Rapid Framework® concept is based on experience from the development of the Catcher FPSO in 2017, allowing for concurrent hull construction and topside integration by removing interdependencies during the construction phase. The design, according to BW Offshore, can accommodate the most advanced topsides. For Barossa, the topside weight is expected to be approximately 35,000 tons.

The FPSO will be built in South Korea and Singapore before being towed and permanently located in the field where it will process natural gas prior to its transport via pipeline to Darwin LNG. Condensate will be stored on the FPSO for periodic offloading.

Barossa will provide the next source of gas for the existing Santos-operated Darwin LNG plant once current reserves from the Santos-operated Bayu-Undan field in the Timor Sea have been depleted.

Initial gas production from the FPSO is expected during the first half of 2025.