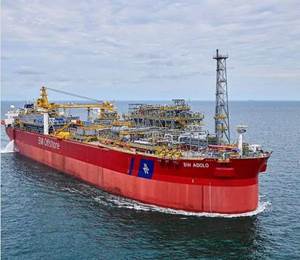 "The DTM-5H well marks the completion of the first of two new well clusters on the Tortue field which will be tied back to the FPSO BW Adolo and boost oil output," BW Energy said Wednesday.

First production from the completed cluster, consisting of the DTM-4H and DTM-5H production wells, is planned for March 2020.

The second cluster, also consisting of two wells, is expected to be in production by June 2020.

The Tortue development will upon completion of Phase 2 have six wells producing an estimated total of 17.3 – 21.6 kbopd gross for 2020, compared with 11.8 kbopd gross on average produced in 2019.

Carl K. Arnet, CEO of BW Energy: "We are pleased to be on plan and budget for the completion of our current well program. This will give us a substantial increase in production over the coming two quarters.”

The DTM-5H well was drilled with the Borr Norve jack-up rig in 116 meters of water depth as a horizontal production well in the Gamba reservoir.

A long horizontal section of good quality oil-saturated Gamba sands was penetrated and completed and the subsea tree installed ready for hook up. The rig has now moved on location and spud the DTM-6H, and will drill the fifth and sixth development wells in the Tortue field, BW Energy said Wednesday.

Production from the Tortue field's first phase began in September 2018, 18 months after the initial investment was made in the Dussafu license offshore Gabon.