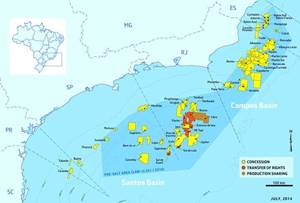 The Brazilian government will offer in an auction in October production sharing contracts for companies to explore areas that it says hold "significant volumes of oil and gas", the country's energy council CNPE said on Thursday.

After a meeting in Brasilia, CNPE decided on some rules for the auction that will offer extra oil from the so-called Transfer of Rights area, a high-yield, pre-salt region currently being explored by state-controlled oil company Petróleo Brasileiro SA.