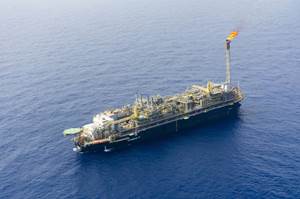 Brazilian oil company Petrobras on Friday started the bidding process for the acquisition of a new FPSO for the Búzios field, in the Santos Basin pre-salt area, offshore Brazil.

Called P-80, the FPSO will be the ninth unit to operate in the field, with the capacity to process 225 thousand barrels of oil and 12 million cubic meters of gas per day.

Like FPSO Almirante Tamandaré, currently under construction, the P-80 will be the biggest oil production unit to operate in Brazil and one of the biggest in the world. The P-80 is expected to start operating in 2026.

"The unit will be contracted under the EPC (engineering, procurement, and construction) modality and is the result of Petrobras' strategy to develop new projects for its own platforms, incorporating the lessons learned from the FPSOs that have already been installed in the pre-salt, including contracting and construction aspects," Petrobras said.

The contracting model, as in previous experiences, foresees the participation, by means of public pre-qualification, of national and international companies, all with recognized experience, the company added.

"Petrobras continues to use the concept of standardized projects as a reference for these contracts, incorporating standardization of specifications and a market approach model. Innovations were also implemented, such as: a mechanism to treat and reinject the water produced in the reservoir; technologies to reduce the emission of pollutant gases; and the incorporation of systems that reduce the need for diving for hull inspection," Petrobras said.

The Búzios field, discovered in 2010, is the largest deep-water oil field in the world. Petrobras has described the field as a world-class asset, with substantial reserves, low risk, and low lifting cost. It should reach the end of the decade with daily production above 2 million barrels of oil equivalent per day, becoming the Petrobras asset with the highest production.

Currently, there are four units operating in Búzios, which account for more than 20% of Petrobras' total production. The fifth and sixth platforms (FPSOs Almirante Barroso and Almirante Tamandaré) are under construction, and the seventh and eighth units (FPSOs P-78 and P-79) are in the contracting process.