Banff FPSO Arrives at Kishorn Port ahead of Recycling 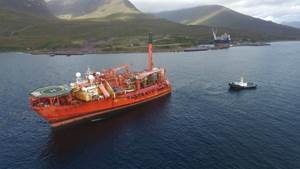 Teekay's Banff FPSO, which recently ceased production in the UK North Sea, has arrived at Kishorn Port for temporary mooring, ahead of recycling.

The Banff FPSO had been producing oil for CNRI at the Banff and Kyle fields, some 200 kilometers east of Aberdeen in approximately 90 meters - 95 meters water depth.

In the first quarter of 2020, CNR, the operator of the Banf and Kyle fields, informed Teekay of its intention to cease production in June 2020 and decommission the Banff field shortly afterward.

Teekay than decided to remove the Banff FPSO and Apollo Spirit FSO from the Banff field in 2020 and the subsea equipment in 2021.

The company recently said it expected to recycle the FPSO unit and subsea equipment and redeliver the FSO unit to its owner following removal from the field.

The 1997-built Banff FPSO ceased production in June 2020, and will now be prepared for recycling.

Colin Ortlepp, Director of Kishorn Port Ltd said: "We’re pleased Teekay has chosen Kishorn to moor the Banff FPSO. This is the port’s third significant project in 2020 following on from the downsizing and recycling of the casualty vessel, the MV Kaami, and the ongoing preservation of the Voyageur Spirit FPSO.”

During the anchorage period, port services and support will be provided by Kishorn Port partners Ferguson Transport and Shipping.

Ferguson’s Operations Director, Jack Ferguson, said: "We very much look forward to providing KPL, Teekay and its partner Altera infrastructure with marine, logistics and support services whilst she remains with us in the port."

The Banff FPSO, which has an overall length of 120 meters and a width of 42 meters, will remain moored at Kishorn Port until a suitable location is selected by Teekay for the appropriate recycling of the unit.