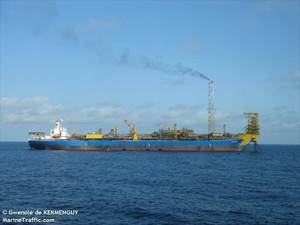 Eni brought the field online via the FPSO Ngoma located 15 kilometers from the oil field.

The current output level is around 10,000 barrels of oil per day, and will ramp-up to 20,000 barrels per day during the next weeks.

According to Eni's preliminary estimates, the field holds over 650 million barrels of oil in place, with a further potential that will be verified after the drilling of new appraisal wells.

"The record time set for the field to become operational, nine months after its discovery last March, confirms Eni’s successful endorsement of the fast track model in the development of its discoveries, a strategy based on operational synergies with already existing infrastructure that maximizes projects value. The strategy is enabled by a phased field setup, which includes an early production stage and, after the completion of the appraisal campaign, the subsequent development of the full potential through a new development hub," Eni said Friday.